On the weekend of the 2nd/3rd of March, UBBC, working with Gloucester Hartpury, played a part in hosting the BUCS Fours and Eights Head on the Gloucester Sharpness Canal for the first of three years. UBBC helped to provide the personnel and marshalls to run the two day event, with both the senior and novice squads getting involved.

Saturday’s racing took place under sunshine and proved an excellent opportunity for the beginner crews to taste the new course. UBBC’s novice squad was well represented here, the women entering a quad, four and eight and the men entering a quad, eight and two fours. The women’s coxed four arrived as a new crew looking to emulate the previous year’s win and held their nerve on the new course, winning a bronze overall and making it Bristol’s second consecutive medal in this category. Having never raced in a sculling boat before, the women’s quad were looking to get through the course in one piece and maintain a consistent rhythm. Marshalling in good spirits, they steered true and were very pleased with a strong fourth place finish. In division 2, the women’s eight may have been racing for time only, but it didn’t stop them from attacking the course. Overtaking two crews ahead of them kept their motive going as they finished in a time that would place them 6th in the event.

Our Novice Women’s 4+ making their way to the start line.

The novice men’s eight arrived with limited preparation and “ergos as fat as their egos” but were determined to leave with medals around their necks. Confidence was running high as the crew set off and built their speed as the race progressed. However, the wind caught out the crew as “the mother of all crabs” was caught and threw the crew off. A rocky finish led to a performance that the crew were disappointed with, but glad to have the experience under their belt. In the duel of the novice fours, the crews finished 12th and 25th in a highly competitive field, with the ‘A’ crew of Zac Garcia, Arthur Leaver, Orlando Kitto-Lloyd and Harry Curtis, coxed by Charlie Rogers, coming out ahead. The men also raced a quad in the afternoon division, finishing a respectable 7th in a large field. 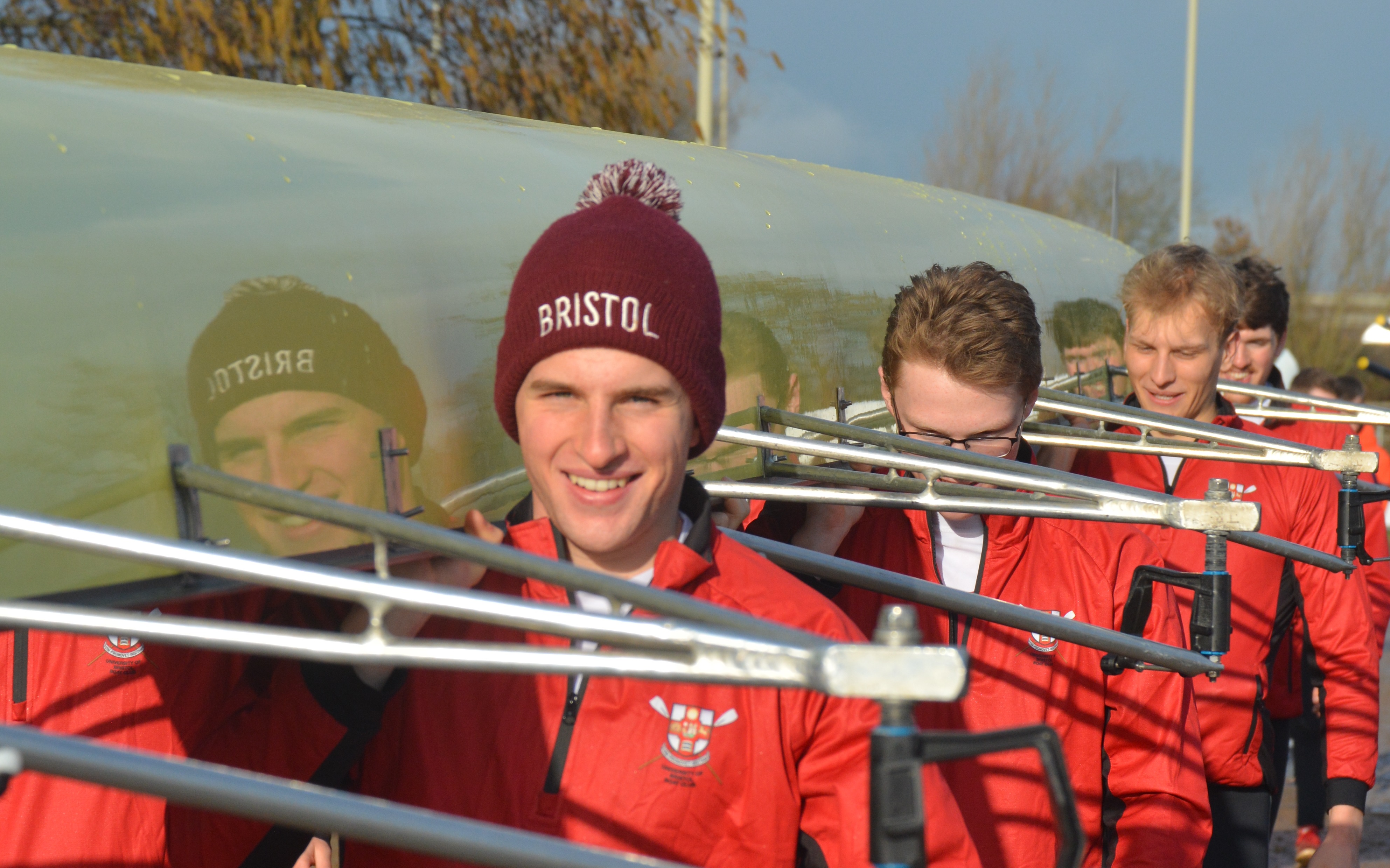 The Novice Men’s 8+ ahead of boating for their divison.

With storm Freya rolling in on Sunday and a very strong tailwind forecast to only get stronger as the day progressed, things were looking set for the seniors to produce some seriously quick times. With the day split into four divisions, the senior women’s eights were the first to race down the track, both racing in the intermediate category against 33 other crews. The first eight finished on the podium, collecting a bronze medal for the second year running, while the second eight finished 12th in the large field.

Unfortunately, the timing of the divisions resulted in the men’s fours waiting for over 2 and a half hours to start their races, but in a tailwind gusting at over 40mph, the three men’s fours got underway. First down the track was the men’s coxless four, racing in the championship category. The fast conditions led to a fast time of just over 16 minutes for the 5000m course and an impressive 4th place finish in the highly competitive event. Next to come down was the lightweight coxless four. Having come home with a medal the previous year, the pressure was on for the relatively young crew to deliver. In the highly competitive field, the crew finished 7th in an equally rapid time of under 17 minutes. Third and finally was the intermediate coxed four, in the large field of 31 crews. With limited preparation, the crew went in with limited expectations, but an early overtake got the crew fired up and racing, setting them up for a race-long duel with the Cardiff four ahead of them, getting an overlap before backing off and leaving a large gap in the non-timing zone. In spite of the wheels coming off towards the end, the crew finished 8th, one place lower than the finish from the effective top heavyweight crew of last year.

Unfortunately, as the wind picked up, the race directors made the decision to cancel divisions 3 and 4, meaning that neither the men’s eights nor women’s fours got the opportunity to race. An unfortunate end to a weekend of both impressive racing and a huge contribution from the entire club to help run the event.