Coming off the back of successful camps for the senior and novice squads, the entire club arrived at BUCS Regatta prepped and ready to go. UBBC were out in force on Saturday with crews racing in 7 different events, all with A finals or medals in mind. While many of the crews placed in the top 12, and therefore progressed into the A/B semis, it was a tough morning for the scullers of Marcus Smith and Arun Jackson, both of whom finished 13th in their time trials and just missed out on the A/B semis. The two would race their C finals later in the day and finish 6th and 2nd respectively. There were even more dramatic scenes in the men’s beginner coxed fours as the ‘B’ crew managed to place ahead of the ‘A’ crew in a shocking result. To add to the drama, the crews finished in positions that seeded them into different finals, meaning there would not be a second round.

While the women’s intermediate pair and quad both missed out on their respective A finals, finishing 6th and 4th in their semis, three crews managed to make it into the A final of their events. First to go was the women’s lightweight eight, who held off challenges from Exeter all the way down the course to take an emphatic bronze medal behind the crews of Oxford and Cambridge. Rosa Müller was the next to race in the women’s beginner singles and came through to win the bronze medal from a field of over 40 entries. The last Bristol crew in an A final came in the form of the men’s 1st VIII, a race that landed the men a sub-6 minute time, the bronze medal and the pennant for intermediate eights, a fantastic result for the men’s squad. 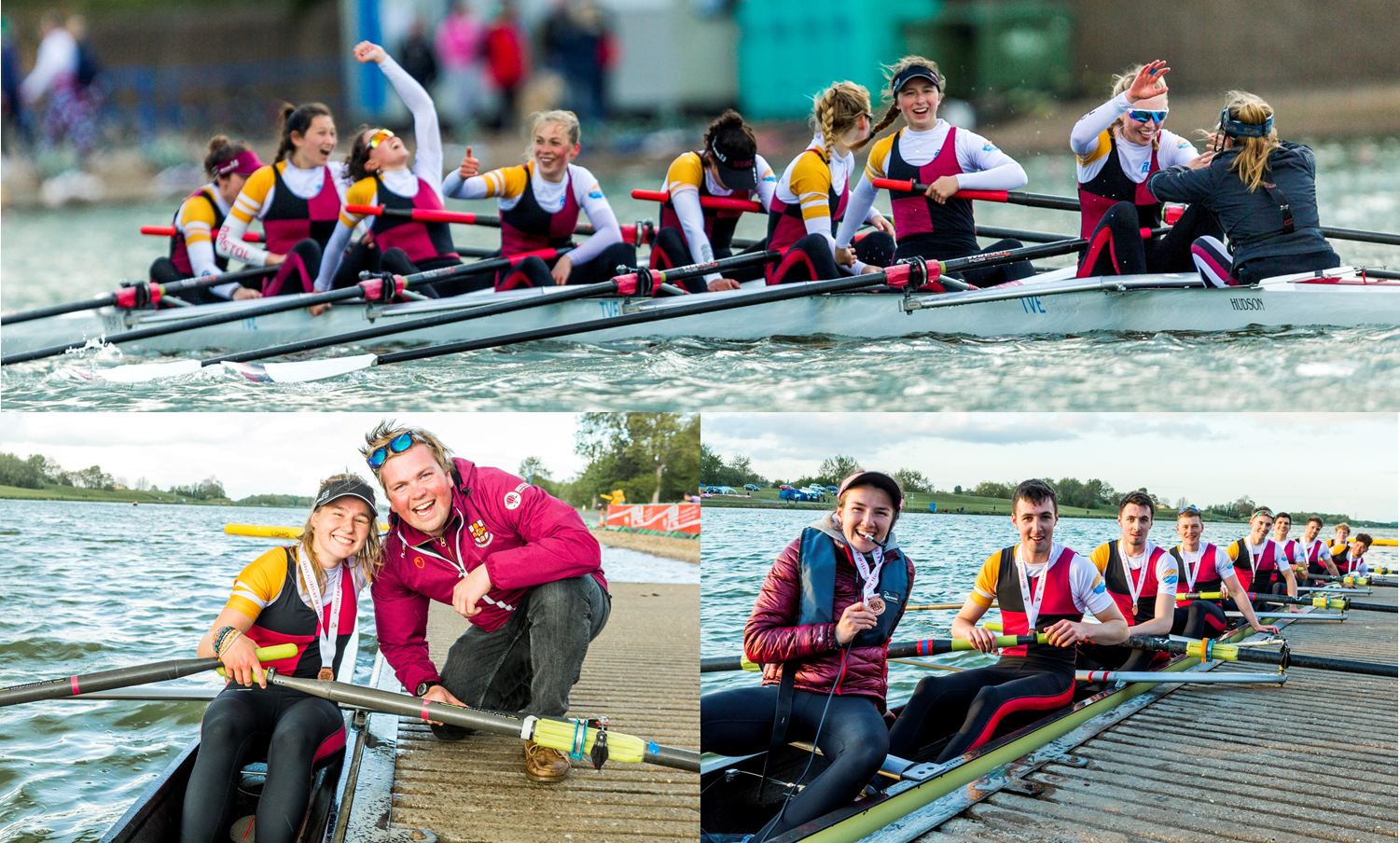 All smiles for Saturday’s medalling crews.

Sunday’s racing for Bristol began with an impressive performance from the women’s beginner coxed four, who finished second in their time trial less than half a second ahead of the crew from Durham. Along with them, 6 other Bristol crews progressed into races for spots in A finals. While the women’s beginner coxed four, lightweight four and championship eight, with Alice Davies coming back from rowing at UL for the year, both progressed smoothly into their respective A finals, there was less success elsewhere as the remaining crews missed out on A final places, with the men’s beginner eight and intermediate double coming within seconds of taking 3rd in their semi-finals.

Going into the A finals, all eyes were on the senior and novice women. The novices in the four were the first to race, breaking away with Edinburgh and Durham from the rest of the field to take the bronze medal, matching the result of the previous year. Next in the A finals was the women’s lightweight four, who had a gutsy row but ultimately came home in 4th behind the crews of Durham, Oxford and Cambridge. With all other races concluded, it was the turn of the women’s 1st VIII, racing in the championship event. The result was an impressive 5th place, backing up the previous year’s all time high of 4th and further praised as the eight finished ahead of crews from multiple high performance programs.

UBBC were up bright and early for Monday’s racing, competing in the very first event, the lightweight men’s quads, along with crews in 9 other categories including the championship women’s fours, both coxed and coxless. While the lightweight women’s pair and women’s beginner eight missed out on their respective A finals, it was more success for the lightweight men’s quad as well as the women’s championship coxed four, as both crews progressed into the A finals for their events. Elsewhere in the racing there were inter-club duels between the intermediate pairs of John & Rob Davies and John Alden & Dmitry Nararenko, as they were drawn together in one of the three semi-finals for the intermediate men’s pairs, and in the F final of the men’s beginner single between Harry Curtis and Owen Taylor. John and Rob held off the challenge to progress into the A final of the men’s intermediate pairs and Harry comfortably took the personal victory over Owen.

Following this, John and Rob placed 5th in the A final, a strong result given both are in their first year at Bristol, while the women’s championship coxed four placed 6th in the final. For the lightweight men, it was a strong row in the final to finish in 5th place, in a race that was described by 3-man Will Linton as one of his best races ever. For the women’s beginner eight, their BUCS Regatta ended in a personal triumph as they took the win in the B final, and there were similar positive emotions for the men’s intermediate quad in the final race for Bristol, as they placed 4th in the B final of their event, with strokeman Arun Jackson saying it was “the best sculling race I’ve ever done”.